Take the road to Faribault to see a number of artists including this duo who will display in Julie Fakler’s studio. (stop #10) Deborah Johnson transforms beautiful kimono silk remnants into colorful table runners. Her craft is Rozome or Japanese batik, which lends itself to a painterly style using brushes instead of the traditional tools associated with the process. In 2008 she traveled to Japan on a textile tour led by Betsy Sterling Benjamin, artist and author of the World of Rozome – Wax Resist Textiles of Japan. Inspired by Japanese Rozome artists she developed her own style and methods to create cloth to be enjoyed in the home or on the body.  When she’s not engaged in her art she works part-time as a labor-delivery nurse and recently finished the Medtronic TC 10 mile, an event of the Twin Cities Marathon. 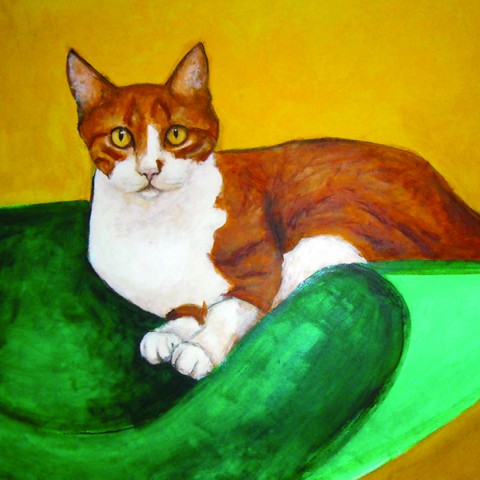 Julie Fakler can’t resist a chubby cat, over-affectionate dog or protective donkey. She specializes in painting people’s pets and livestock, and is the artist who painted the Studio ArTour’s Rice County Cows featured on this year’s website (www.studioartour.com) and literature. An MCAD grad, she has been exhibiting in central and southern Minnnesota for many years and looks for ward to opening up her studio once a year on the Studio ArTour.

Paradise Center for the Arts (stop #12)