Sue Hammes-Knopf: As Joyful as her Jewelry 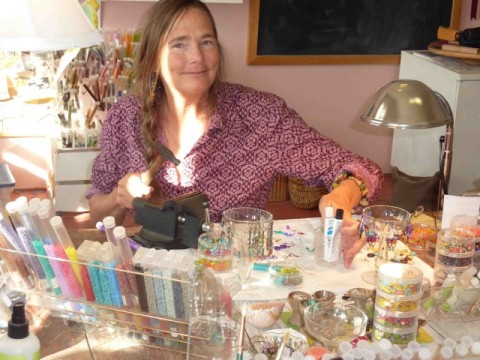 The scale may be smaller, but the quality of the artists is at least as high. Every artist in the building is opening up his or her studio for the Studio ArTour this year—a feat no less than getting every last voter on your block to vote.

Last week, Hammes-Knopf invited me to Wine Time, an evening ritual she hosts with painter and studio-mate Maryrose Gondeck. I got to preview the studios, meet members of the McClaughry art community, and yes, share the fine wine 😉

“I’m excited to invite customers to see my workspace,” says Hammes-Knopf who has been touting the tour all summer. Known for her brightly colored, contemporary jewelry, she says she wants people to see that the joy and exuberance in her work is reflected in the artist and the studio, too.

Hammes-Knopf is well known in southern Minnesota, throughout the Twin Cities and in Florida where she winters. And that’s just for starters. In June she was awarded Best of Show for Jewelry at the Wayzata Festival of Arts. In August she was a finalist at the Uptown Art Fair. And she just heard that she was awarded an Individual Artist Grant by Southeastern Minnesota Arts Council.

October 20 and 21 from 10 a.m. to 6 p.m. she’ll be among the McClaughry Building artists inviting you to feel the good vibes of their unique art community. Watch for more artist profiles right here as we count down to the tour!